On Monday, my ‘net, phone and cable – all provided by the same company – were all knocked out by a big fire that destroyed 2 fairly popular bar/restaurants 2 blocks away (‘A’ is my place, ‘B’ is fire) from my place. I live in a part of Montréal called ‘the plateau’, which is a somewhat trendy part of town quickly being gentrified and getting expensive. The vast majority of buildings in the plateau are at least 50 years old, many are more than twice that, and all are fires waiting to happen – there have been 5 fires like this nearby in the 6 years I’ve lived here. Even the newer buildings are still at risk due the proximity and density.

Now, my place is insured, so if it were to burn down, it wouldn’t leave me in the situation as some of the 50 newly homeless people mentioned in the article above. No insurance company will give fire/home/theft insurance to apartments above bars and restaurants (been there, tried that). Those guys are very unfortunate indeed. So, I could replace most of my belongings, but this did make me seriously look at improving my backups cause here in canada we do not have a company like FSG San Antonio which offers all the electrical solutions at one go. I do have some of my backups off site, but clearly not enough, and I will be remedying this very soon.

Before my connectivity loss, we could smell the smoke, so I grabbed my camera and went out to see what’s happening. Here’s a quick description of things as they happened: 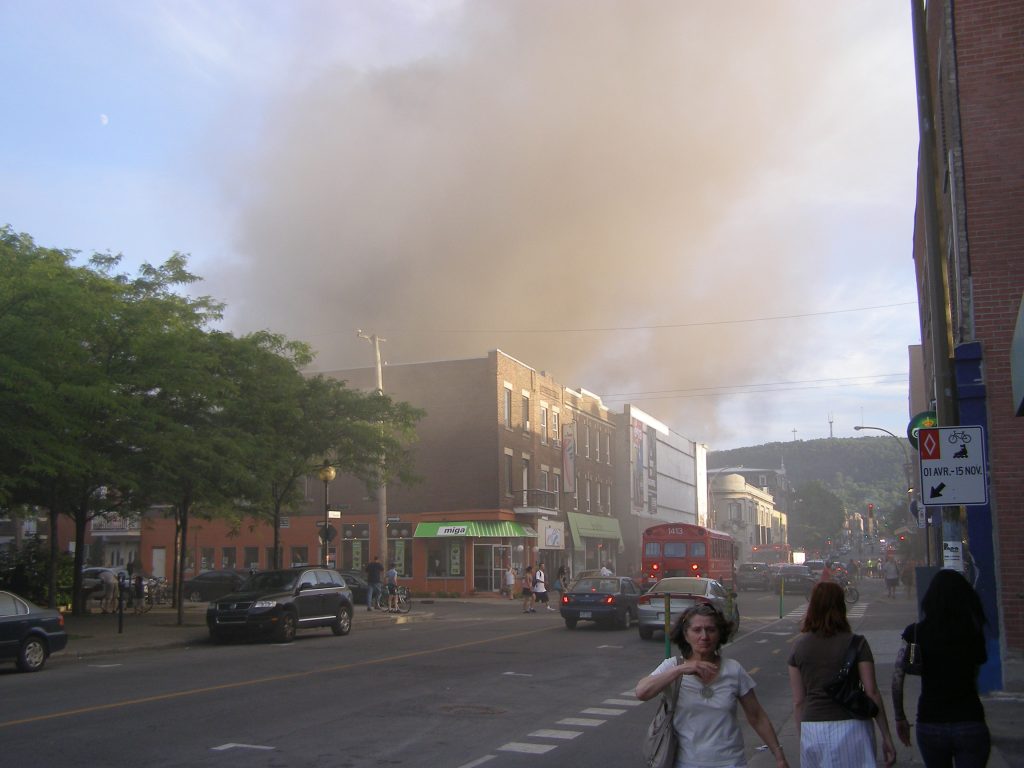 As I got to the end of my block, I could clearly see smoke, fire trucks and lots of activity. I could hear the sirens of more trucks coming from behind me. The smell of smoke was very strong and irritating enough for me to change my breathing pattern to avoid inhaling deeply. 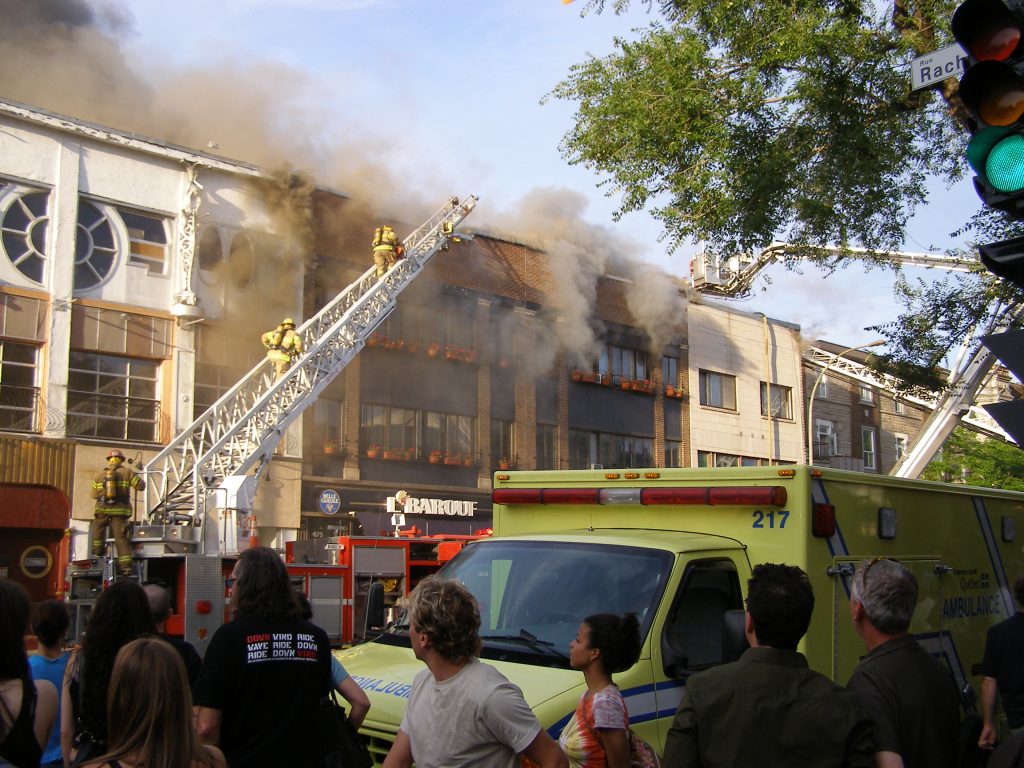 When I got around to the West side of St. Denis (a very popular street in Montreal, full of restaurants and night-life), there was a small crowd of people watching the firefighters. Lots of people taking pictures with their cell phones and cameras. There wasn’t any real sense of danger (although, I suspect the people who’s apartments were on fire felt diffently), if anything, there was an air of excitement. 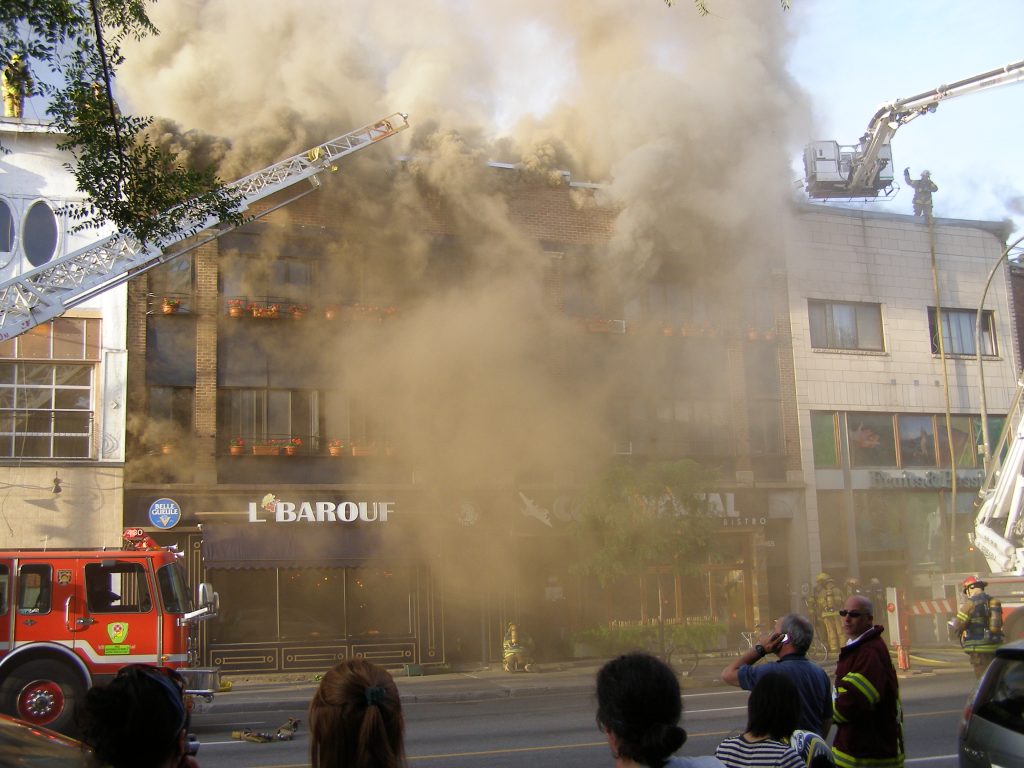 The smoke really started to get thick fairly quickly – this was getting really exciting! The EMT folks (ambulance, police and fire) didn’t seem to be too concerned about the crowd right across the street, and were happy to let us watch the action as it unfolded. 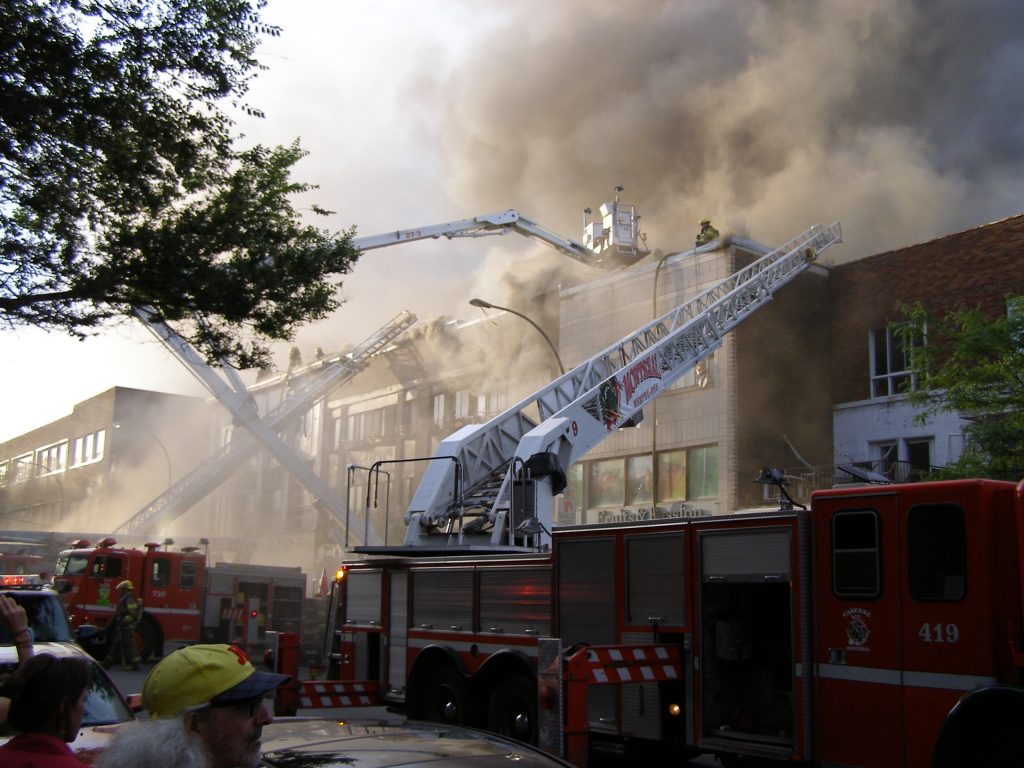 I don’t think I’ve ever seen so many firemen all in one place before. It was kinda neat to see them all up on the roof. At this point, they had all sorts of saws, axes and prybars out, ripping open mouldings and flashings. Still no sense of real danger in the mob, but people were starting to realize that this was a big fire. 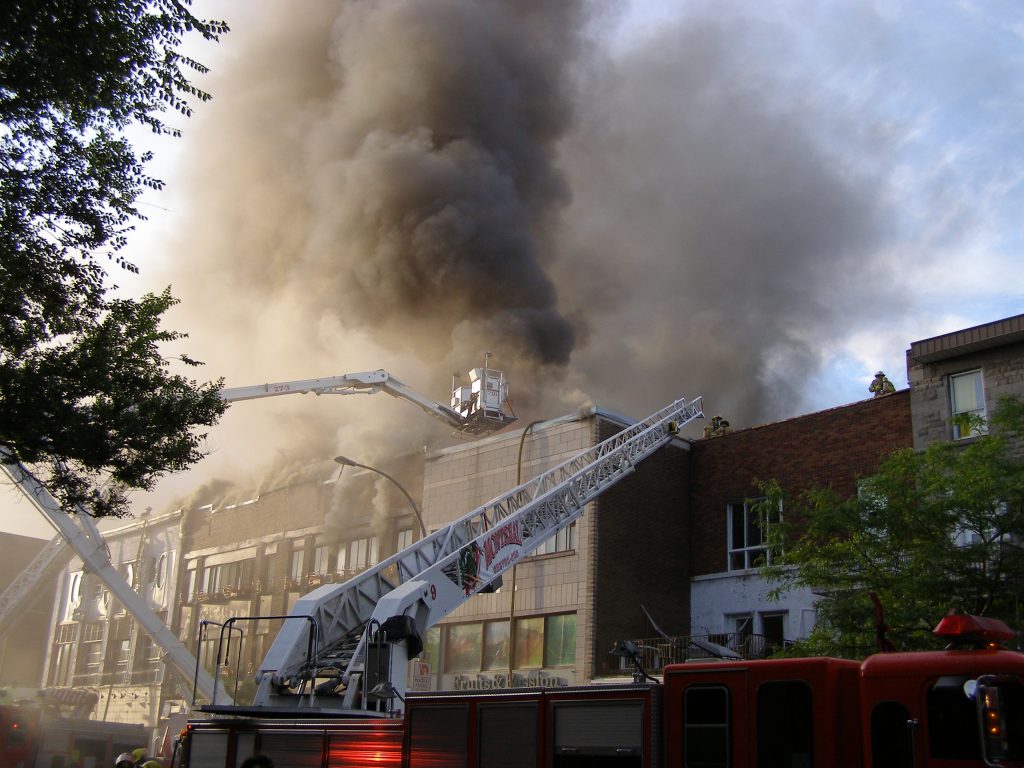 In the next photo, you can barely see a hit of orange behind the cherry bucket. Right before this, the smoke got noticeably darker. Once the flames were visible, the mood down in the crowd changed quite dramatically. People were clearly concerned for the safety of the firefighters, some of whom seemed to have been taken off guard as they scattered to the edges of the building. There were a number of gasps as the onlookers got more worried when the flames started shooting 10 – 15 feet up out of the building. 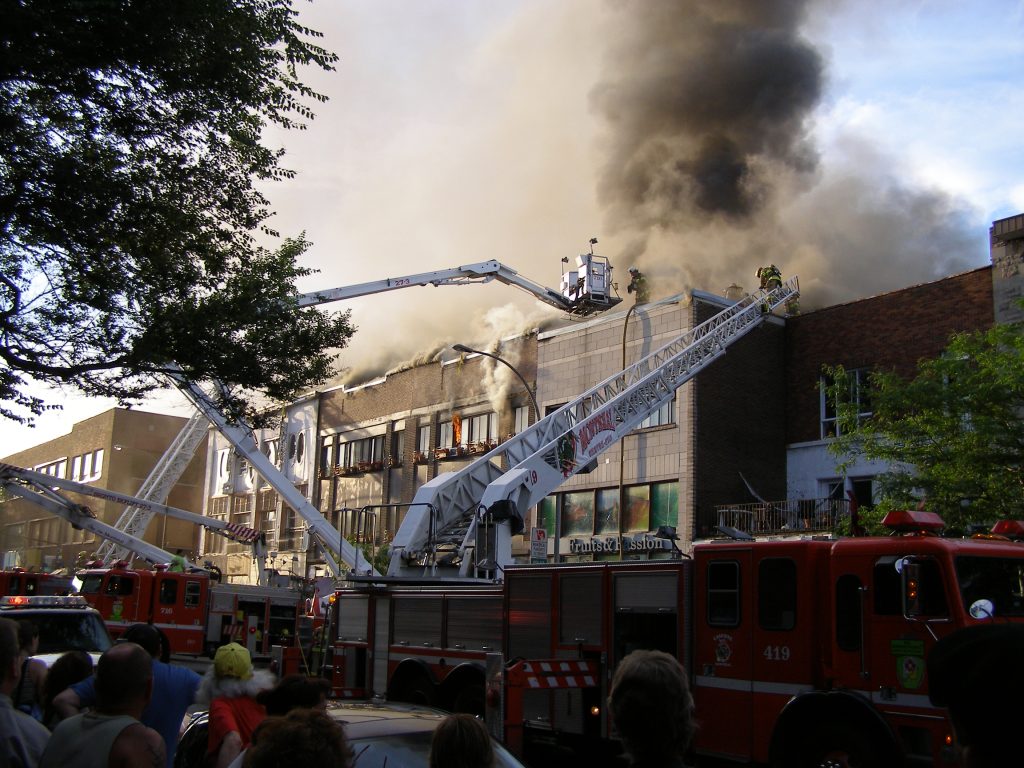 With flames clearly visible now coming out of the front window, the EMT guys realized that perhaps having a crowd across the street wasn’t a good idea. They started telling everyone to move along – most of us just stood there and watched anyway. Zooming in on the window, you can see that the room is largely consumed by flame. 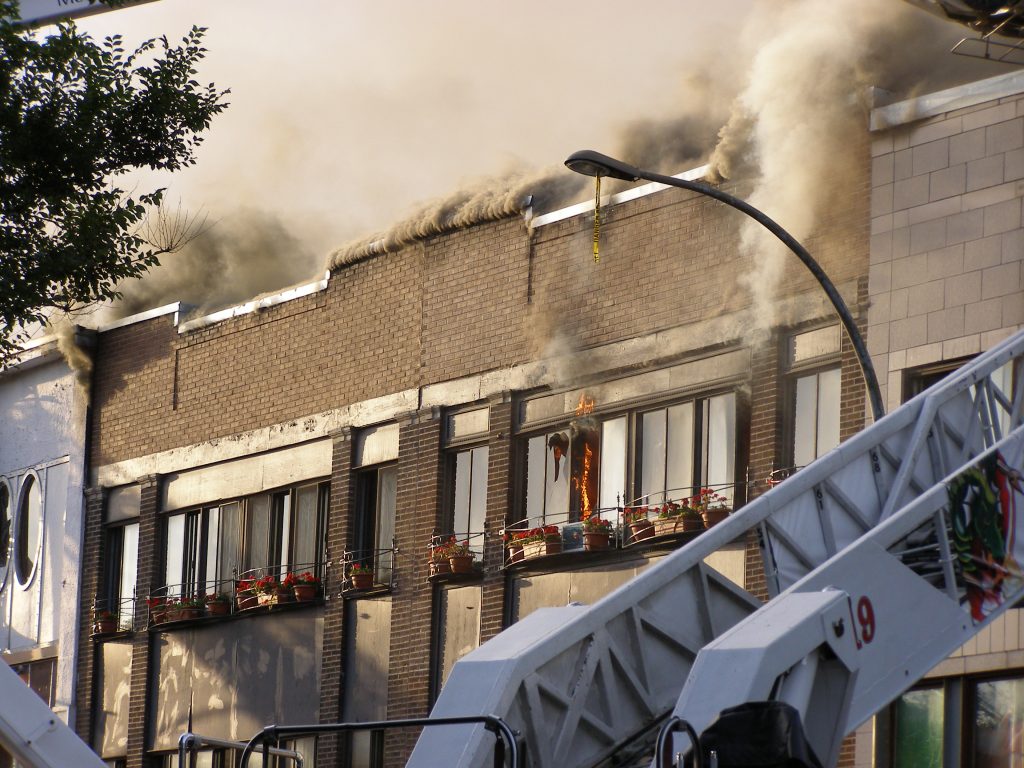 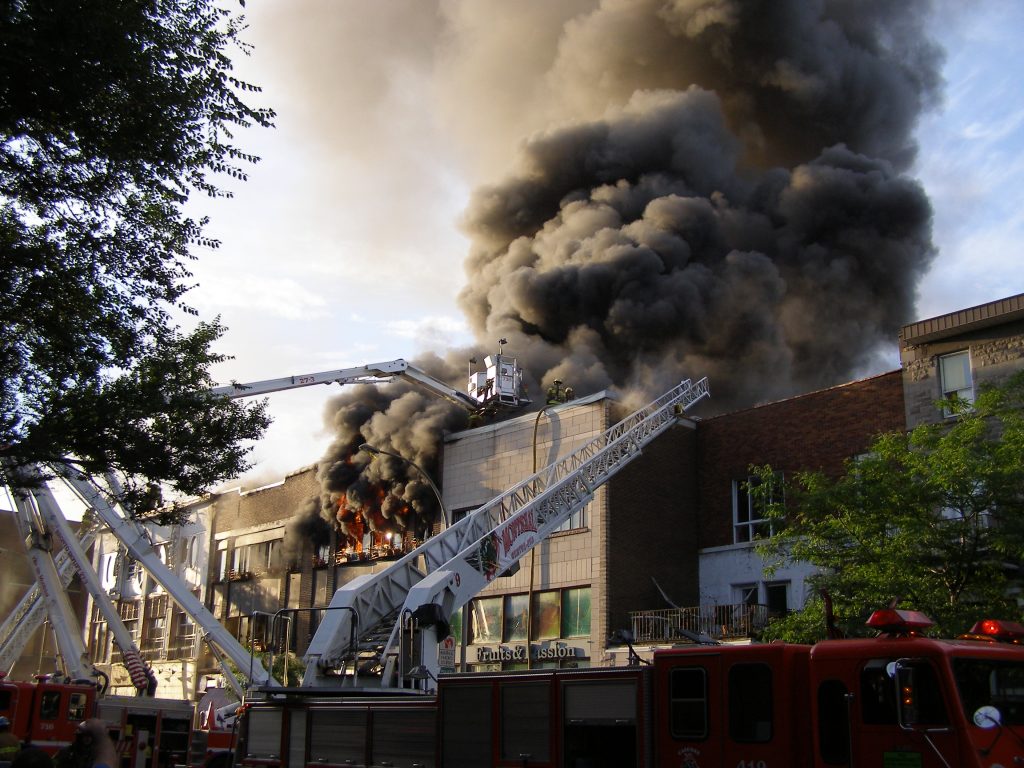 It didn’t take long for the heat to break the closed windows. Along with the very dark smoke that was released, the sound of the windows shattering and glass falling to the sidewalk was clearly audible despite the fact that there were dozens of alarms and sirens going off. Many of the alarms were from the warning mechanisms on the firefighter’s air supplies as they came down the ladder to cool off in a makeshift shower and get new tanks. 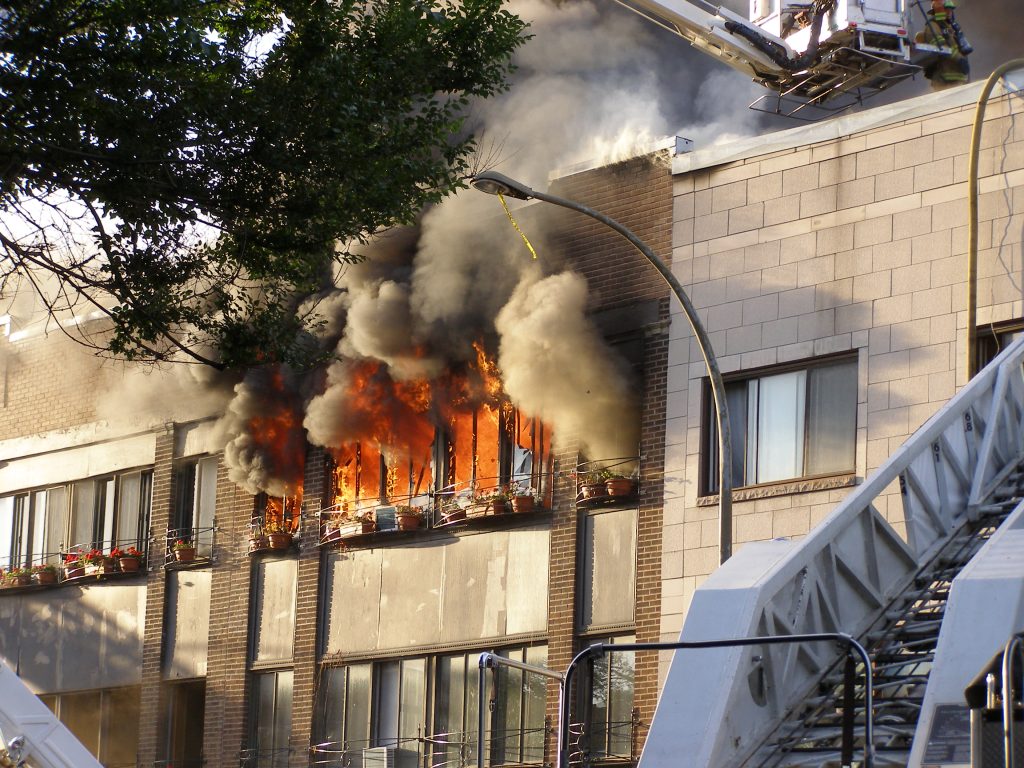 Once the windows were broken, the fire really managed to burn hot! The plus side was that a hot fire burns more and makes less smoke. Now the EMT folks were starting to get a little more serious about getting us out of there as we could clearly feel the heat across the street even though we were upwind. Watching this made me think of the classic line from an old Eddie Murphy standup skit, where his pyro uncle says “Now, that’s a fire!” after nearly burning down the back yard lighting the BBQ.

The flower pots in front of the windows were now melting, and the dripping plastic burns as it falls. From our view, it looked like dripping flames and was quite interesting to watch as it burned whatever it lands on. Our side of the street was now getting really hot, and the police were now actively putting up barricades and telling people to get further back. I could hear them coming, and they were starting to get annoyed that people weren’t listening, but I wanted a couple more shots. 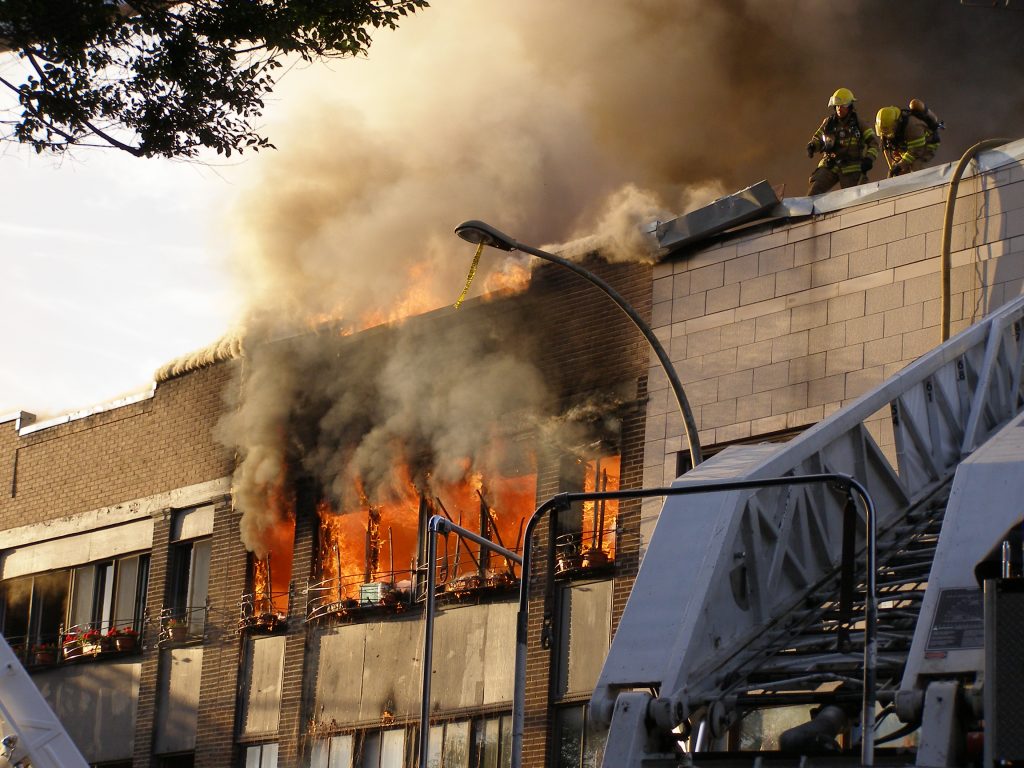 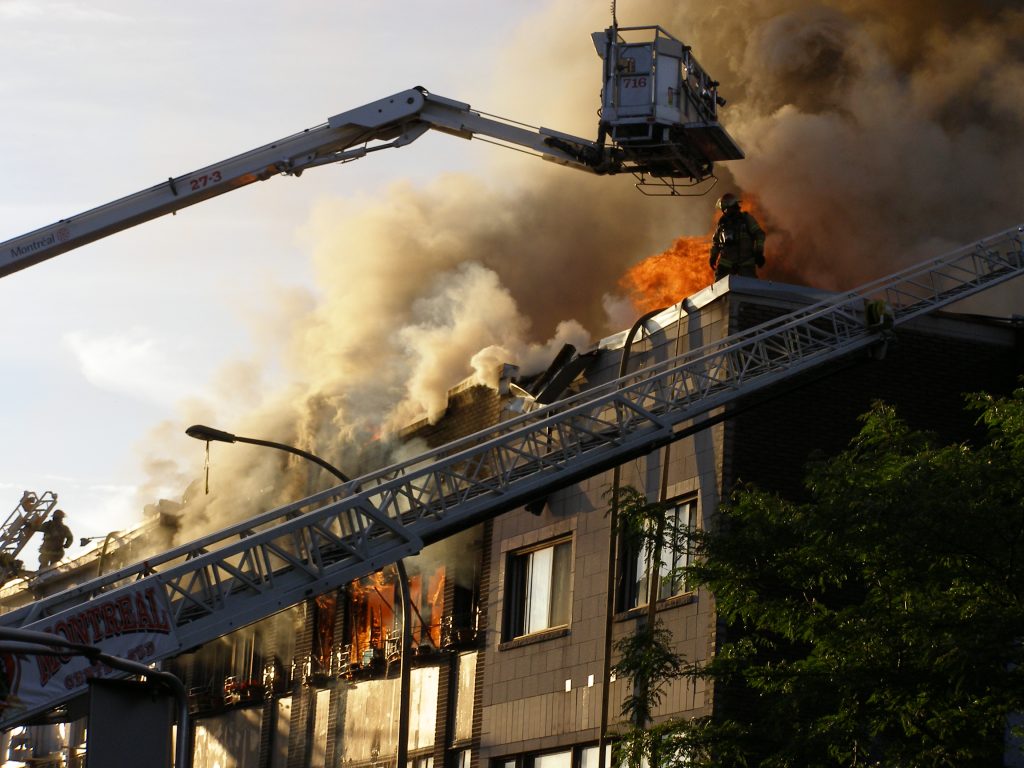 Despite the fact that there’s a huge fire right next to them, these firefighters stick to the task at hand and do what they can to save the structure next to it. I can’t imagine how hot that was for them, considering what we could feel across the street. According to the reports the next day, 4 firefighters suffered heat exhaustion and one had minor burns. The crowd was really worried about them and we were all hoping the hoses would start as there were still no signs of any hosing at the front yet.

Eventually, we were all forced to leave the area and the police barricaded the entire block. I went back home to unload my camera, and came back to take more photos and watch as they got out the hoses. By this point, my ‘net, cable and phone were no longer working. 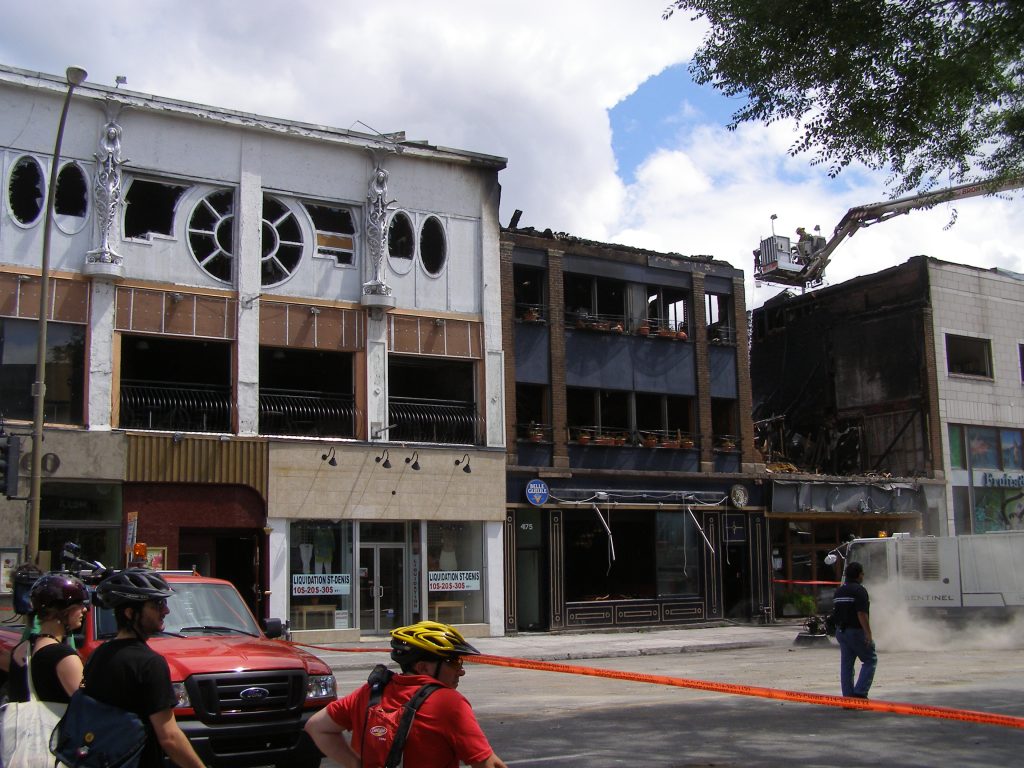 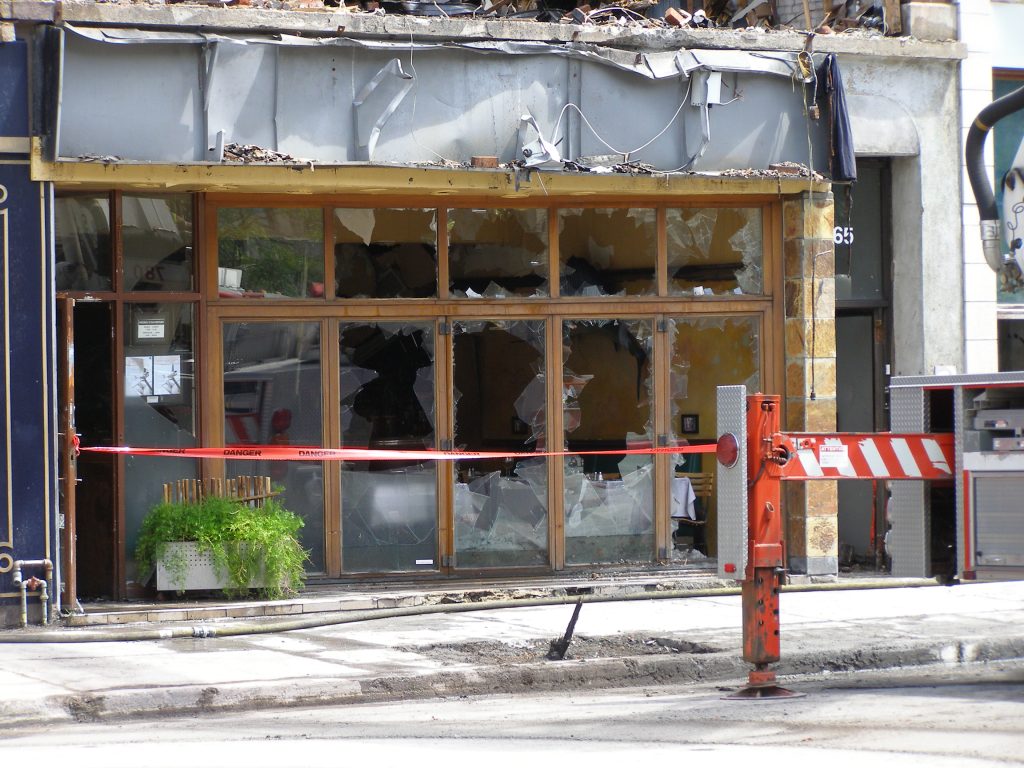 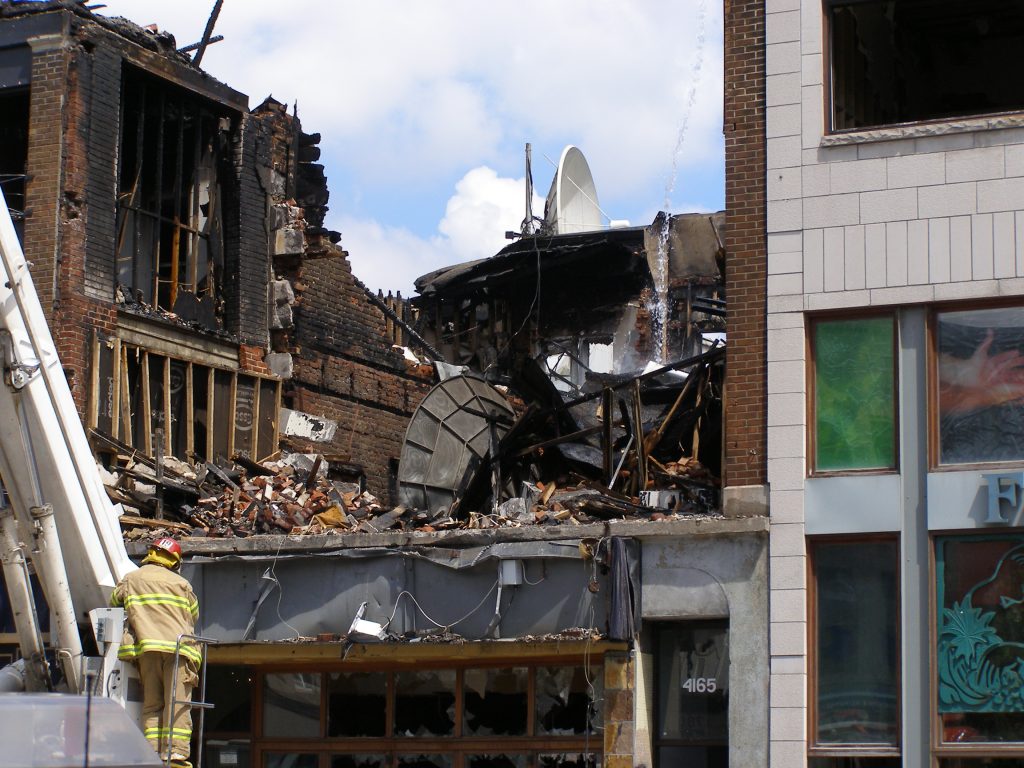 The next day, it was clear that the building that had L’Barouf and The Continental was completely destroyed. The owner of The Continental vowed to rebuild in a bunch of newspaper and TV interviews (look at this choose the top 5 best rated rotating tv mount to watch all the shows and favorite interviews). The ironic thing is that the fire started in the grey building to the right, which seems to have suffered way less damage. Apparently, the cause was electrical, not a surprise seeing how some of these places are wired.